Arabella is petite, dark-haired, pale-skinned, and has exotic features lending to an unknown heritage. Recent discoveries indicate she may be of Romany origin. She has an eclectic style of dress which changes with her mood, partial to anything with a romantic or Gothic sensibility. She is a scholar to the tee, rarely found without a book or her laptop in her hands. Don’t let this fool you into thinking she is a shy and docile individual. Arabella has no trouble speaking her mind, and sometimes must unhappily deal with the consequences of her opinions.

Arabella Elyse St. John was adopted at the age of two by Alexander and Maria St. John, a prominent international lawyer and his socialite wife, locals of Montreal, Quebec, Canada. Her childhood was spent abroad, due to her father’s business dealings. She was mostly raised by au pairs and nannies during her formative years, before being sent to boarding school in Switzerland from the age of thirteen through eighteen, to be brought home whenever her parents needed the appearance of a cohesive family unit. While attending Montreal’s Concordia University, and much to her father’s dismay, she chose the path of the scholar for her future, studying history and specializing in Ancient Civilizations. This eventually led her to King’s University in London, Ontario, where she attended graduate school and worked in the campus library with Marcus Whelan, who would later become her sire. She led an independent and rather carefree life, until the murder of her best friend and the events surrounding it made her much more aware of the supernatural. A mysterious lover and her zealous curiosity about his identity led to the terms of her embrace. She was given a choice: Change or deal with the consequences of the truths she had discovered. She chose the embrace.

Almost one year later, many events both strange and terrifyingly unreal, have befallen this neonate Kindred. These events have taken her from London, Ontario to Plymouth, Massachusetts, Texas, New York City and back again. Everywhere, trouble seems to follow her. Trials and tribulations abound. As a result, Arabella has been both the perpetrator of the crimes necessary to her existence, and the unwilling victim. Her deepening ties to the brothers Marcus Whelan and Ignacio Moretti will ever be her undoing.

As a neonate, she is usually the pawn of those in control. She currently finds herself in a surprising position of importance, newly appointed as the Sheriff of Plymouth, solving mysteries set before her by the Prince of the City. But there are so many other mysteries to unravel, and her rampant curiosity is not likely to leave them alone. Eldritch fascinations and an unknown birthright often linger in the back of her mind. And then, there is always her taciturn sire.

Her aspiration: to no longer be the pawn in the game. 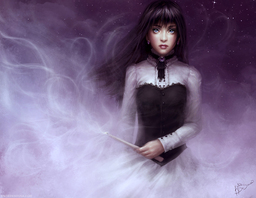